The Start of Waterford - Janney's Mill 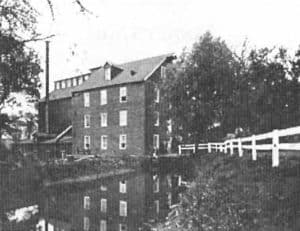 The mill and its race as it appeared early in the 20th century. The additions at the rear of the building have since been removed

The newcomers had come to the Loudoun Valley in search of fertile land; most of them were farmers first. But as the little community grew there was need and opportunity for other skills and services. In the 1730s and 40s, for instance, Amos Janney made a name for himself in the Northern Neck as a surveyor. And since the settlers' chief crops were grain, he also saw a profit to be made as a miller.

With his surveyor's eye, Janney surely had in mind the power potential of the South Fork of Catoctin Creek and its tributary Balls Run when he bought his original 400 acres. We know that he soon built a simple mill of logs to harness that power. That mill is said to have been across the creek from and a hundred or so feet upstream of the mill we know today. It not only ground grain but sawed logs into beams and planks. Curiously, Janney built on Francis Hague's property-there must have been a strong handshake between the two Quaker relatives to bind that bargain.

Amos Janney died just a few years later in 1747-whether from disease or accident we do not know; he was only 45 or so. Fortunately his only surviving son, 16-year-old Mahlon, inherited his father's energy and acumen. [There have been many Mahlons in Waterford's long history. This Mahlon (pronounced MAY-lun) was born in 1731 or 1732; he died in 1812.]

Six horse team and wagon at the scales

Mahlon eventually erected a larger, two-story mill "of wood and of stone" on a near-by site, which he eventually bought from his Uncle Francis in 1762 "with improvements thereon." For more than half a century after the family's arrival the tiny settlement that developed around the structure was known simply as Janney's Mill. Over the years many other mills were built in the area, but the one Waterford now calls simply "the mill" remained the best known.
More on Waterford's mills »

Just across Main Street from the mill-near a shed that still stands-was a set of heavy-duty scales. They may once have been an adjunct to the mill, but I cannot recall grain being weighed there. Wagon loads of hay and straw were weighed from time to time, but cattle furnished the principal business for the scales-this was the transfer point from seller to buyer. Holding pens stood on the northeast side of the building. After weighing and settlement, the cattle were usually driven to the Washington & Old Dominion station at Paeonian Springs but occasionally to other points. [The hamlet of Paeonian Springs lies some three miles from Waterford and a mile west of Clark's Gap. It was founded in 1892, 22 years after the railroad had been extended west beyond Leesburg. Before 1870, Point of Rocks, Maryland, had been the railroad station nearest Waterford. Village ledgers record much commerce through this town in the 1850s.]

As a youngster I helped drive cattle for stock dealer E. H. Beans from the railroad at Paeonian Springs to Waterford. These cattle were resold to farmers who would fatten them for slaughter, then sell to a dealer or a buyer for a packing house.

Mr. Beans had a border collie, Laddie, who was equal to two or three boys in handling cattle on the road. Laddie knew every side road or open gate between Waterford and the railroad. He would get ahead of the herd and be standing at the opening when the cattle got there. Once the drive passed this trouble spot, he would take off across the fields and be waiting when the first steer reached the next such temptation. He was a valuable little dog.

But I have gotten ahead of myself. If we could return to Janney's Mill as the American colonies neared revolution, we would find the place still just a small settlement. Along the boundary between Janney's and Hague's land, a blacksmith shop and tannery were apparently operating in addition to the mill. These three industries would have been essential to the growing agrarian economy.

We do not know much about the blacksmith shop, but the area just south of the scales across Liggett Street was used for many years as a tanyard. A 1785 deed description mentions as the Tanyard Branch a little spring-fed stream that crosses Main Street about a hundred yards south of the mill. From this we may assume that a tanyard was in existence before that date.

There were actually two tanneries in the general area-they may have overlapped for a time. The upper tanyard was owned first by William Hough (1744-1815) and son Joseph (1770-1806), and later by Joseph Bond.

The Houghs' operation was more modest than the one just downstream that followed; Thomas Phillips (c.1783-1842) and Asa Moore Bond (c.1804-1878), brother of Joseph, owned the later enterprise as partners. One local resident remembered it as a "great tannery full of tan bark and mysterious vats that looked black and terrible" to her as a child. [Mary Chamberlin, who married William Clendenin.]

The vats were a series of pits in the ground where the hides were soaked first in a caustic lime solution to loosen the hair, fur or wool then in a strong brew of oak or other bark to tan or preserve them. A building stood there partially covering the vats. Those pits are still visible today beside the Tanyard Branch in what we now call the Bond Street meadow.

The Janneys and Hagues were soon followed by other Quaker families: Taylors from Falls Monthly Meeting in Bucks County, Browns, Williams (1760s), and Moores (1780s) from Gwynedd and Uwchlan Meetings-all in Pennsylvania; Bonds and Walkers from the same colony via Hopewell Meeting in Winchester, Virginia. The Houghs and Steers had also arrived by 1765. All would play leading roles over many years in the development of Waterford.

In the 1760s the early Quakers were joined by numbers of Presbyterians, Methodists, Lutherans and Baptists. This influx of non- Anglicans is noteworthy considering the firm hold of the established Church of England in colonial Virginia. One enabling factor was the Toleration Act of the late 1600s that permitted dissenting congregations to live in Virginia, although all were obliged to pay an irksome tithe (i.e., poll tax) on each male older than 16 years for support of the Anglican Church. [Francis Hague attempted his own tax revolt against this levy in 1753 but was soon brought into line.]

In practice, another factor may have been more important for those who would settle in Cameron Parish (present day Loudoun County). The parish minister appointed in 1749, one John Andrews, was said to have been constantly in debt, with alcohol his constant companion, and unable to police his parish. He was separated from the ministry in 1768, but by then non-Anglicans were firmly established around Waterford and elsewhere.

The local Presbyterian community, for example, had apparently begun to worship together by 1764 led by Amos Thompson, a recently ordained minister from the College of New Jersey-later Princeton University. Many in his congregation had come, as had the Quakers, from eastern Pennsylvania and New Jersey. In 1769 John Micklehaney [McIlhaney], Jenkins David, William Douglass (he of the panther skin), Flemming Patterson, Peter Ker [Carr], Nathaniel Patterson and William Cavins bought for their church near Janney's settlement "one acre of ground with the house erected thereon.” [The church was built on the Clark's Gap road just south of what is now the intersection of Rts. 662 and 703.]

Whether Scotch-Irish immigrants or Pennsylvania Quakers, most of the new-comers lived well outside Janney's Mill. On the site of the future village itself, few lots were available for building because Francis Hague and Mahlon Janney still owned most of the land.

That situation finally changed in 1780 when Hague died. His will directed that his lands be sold, wholly or separately, and the following year his son and executor Thomas sold 12 acres to Joseph Janney." In short order, lots were marked off on the north side of Main Street, and in 1791 Janney laid out 15 more along the south side, from the Mill almost to the existing Post Office-divisions that are clear to this day.

In 1800, Mahlon Janney, continuing the momentum, began selling lots on the extension of Main Street up the "Big Hill," and in 1812 when he died, his executors subdivided his land along Second and High Streets. By the turn of the century then, nearly 70 years after Amos Janney's arrival, the little settlement was beginning to take on the appearance of a real town.