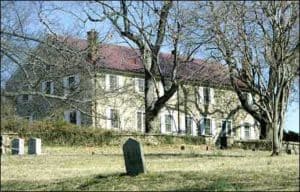 Written by Bronwen Souders and Shari Spellman for the Waterford Foundation

Waterford, although originally a Quaker settlement, has been the home of a variety of congregations during its history. Today, however, there are only two active congregations: Baptist and Presbyterian.

Built in 1761 and 1771, it sits on the site of the original 1741 structure. The size of the meeting house testifies both to its importance in community life and to the large number of Quakers who worshipped there at the time. The meeting was "laid down" in 1929 because there were so few Friends left in Waterford.
More on the Quaker settlement » 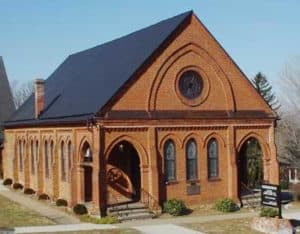 The Catoctin Presbyterian Church was organized in 1764-1765. The Presbyterian Society purchased the present site in 1814, and a church was built some time later. That building, used by Methodists and Baptists as well, was burned in 1883, and the present church constructed. The educational wing was added in the 1950s.

Just when the first Methodist church was established in Waterford, or by whom, is not known; however, Methodists were a strong congregation in Waterford by the 1840s. Many of their members were expelled Quakers. This church, built in 1879, was finally closed due to lack of members. 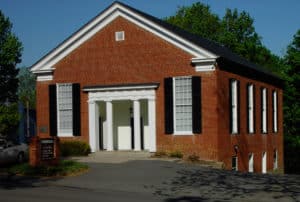 Despite the fact that Baptists were among the earliest settlers in London County, they did not appear in Waterford as a congregation until about the 1850s. However, this fine Greek Revival church seems to indicate a strong congregation at the time of its erection in 1853-1854. Badly damaged during a Civil War skirmish between the Independent Loudoun Rangers and the Confederate forces of Captain Elijah White in 1863, it was rebuilt circa 1876.

In 1891, having scrimped and saved and prayed for the occasion for a number of years, members of Waterford's black Methodist Episcopal Church congregation dedicated their new John Wesley ME Church. They had purchased the site of an old log stable to build this Gothic-revival church for their growing congregation. Before then for many years, members had squeezed into the small school on Second Street for their services and other gatherings.

The men did much of the construction work themselves. Descendants remember the women holding lanterns for the men working late into the night after their day jobs to complete the work and then holding ice cream socials "for years!" to pay off the debt. John Wesley's minister rotated from his Waterford congregation to those of Lovettsville, Hamilton and Hillsboro.

The John Wesley Methodist Church served the black community continuously from 1891 until 1968. 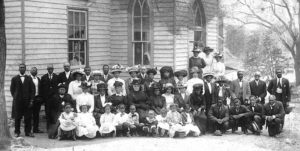