Written by Bronwen and John Souders for the Waterford Foundation.

Read African-American recollections of John Divine, a historian who grew up in Waterford »

A simple one-room school, a frame church overlooking a mill, tombstones in a segregated cemetery. These are the most evocative monuments that remain of African-Americans who for 150 years made up a quarter of this old village-and contributed immeasurably to the building, the life, and the character of Waterford. They are all gone now-along with nearly all of the old white families-but their descendants cherish stories of a rich and remarkable past in this unusual Southern town.

More on slavery in Waterford »

By the early 1800s, Waterford was home to several free black families. Some owned their own homes. A number learned to read and write in defiance of Virginia laws prohibiting the teaching of African Americans. One, Nathan Minor, was buying' a half quire (12 pages) of writing paper in 1816. In 1854 he wrote out his own will, a rarity for black people of the time. It was witnessed by three white men, two of them Quakers. 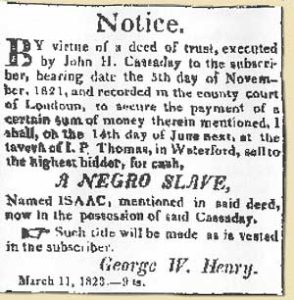 Nevertheless, life was rarely easy for African Americans in this southern village. Main Street saw more than one slave auction as men from surrounding farms gathered to buy and sell laborers. But there were also manumissions, and local Quakers campaigned actively for the abolition of slavery.

More on working in Waterford »

Meanwhile, through the 19th and 20th centuries, blacks and whites lived and worked closely together. The African-American men and boys plied their crafts and skills as fence builders and farm workers, coopers, millers, tanners, and blacksmiths. Nearly all the black women also worked, as cooks, maids, nurses, and washer-women. (An early resident recalled, smiling, that on washing day, "The bushes were all white with sheets spread out to dry.") Through the years several African Americans served village women of both races as midwives. 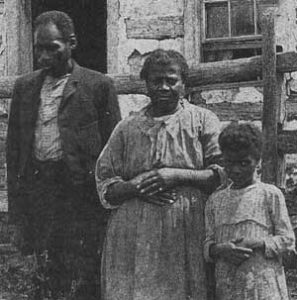 While the economic relationship was usually one of black employee and white employer, there were many instances over the years of deep respect and friendship between adults, as well as children, of the two races. And, in contrast with most Loudoun County towns, there was no "black section": Main, Water, High and Janney Streets all had black ownership at one time or another from the early 1800s on.

More on segregation in Waterford »

Still, there was segregation. One resident, who lived across from the school for white children, wondered why he had to walk several blocks to the "colored" school. And all children, black and white, while they played with each other and went through each other's kitchen doors, were made to understand when they reached their teen years that they had to associate with their own race. African Americans had their own school from the end of the Civil War until 1957. They built their own church-John Wesley Methodist Episcopal-in 1891 (though both the white and black Methodists had balconies in their churches for visitors of either race). They buried their dead in their own half of the segregated cemetery on Fairfax Street.

At the beginning of the 21s' century, the African-American presence is mostly in memory. As the older generation aged, their children and grandchildren left for opportunity elsewhere. Mary Elizabeth Wallace, the last African American to live here, died in 1999, at 79; Sam Palmer, the final trustee of the John Wesley Church, died in 2001.

The black community continues to look to the village for a sense of family and place. Former residents have generously shared letters, freedom papers and photographs, as well as family records and personal recollections to ensure that this rich history not be lost to the present and future of Waterford and to their descendants.