By Ruth S. Bentley
Reprinted from the Waterford Foundation’s Homes Tour and Crafts Exhibit Booklet of 1966. 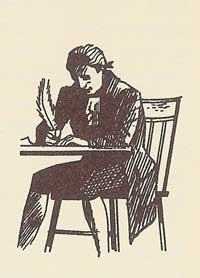 Although Waterford was settled in 1733 it was not until 1801 that its first charter was issued and its first trustees appointed. This was done in accordance with an Act of the Assembly passed in 1680 to encourage the establishment of towns and to promote commerce, trade and manufacture.

The 1680 act provided that a town should encompass fifty acres. Each person who built a dwelling and paid one hundred pounds of tobacco should be awarded one-half an acre of land.

This act also provided that the towns would be managed by trustees appointed by the Assembly, who were to carry on the local government, hold title to public buildings, layout streets and lots. They were responsible to the Assembly rather than to the residents of the town for the conduct of their duties. Waterford's trustees in 1801 were James Moore, James Griffith, John Williams and Abner Williams.

Ten years later, by the Virginia Acts of 1811, these trusteeships became elective rather than appointive offices. Five trustees were elected annually by the "freeholders and housekeepers of the town", and, in addition to their previous duties, were also empowered to assess and collect taxes to be used to construct and maintain public buildings and roads.

The trustees were to hold market days and to appoint a clerk of the market who would, under their supervision, "have assize of' or, regulate the weights, measures and prices of bread, wine, wood and other goods.

Under the Virginia Acts of 1817-1818 the town of Waterford was enlarged roughly to its present limits. The original town encompassed the main street from the Mill to the present post office. But by 1800 Mahlon Janney, son of town founder Amos Janney, had sold lots on the south side of the road leading to the Meeting House. In 1804 the big hill was divided into lots and Edward Dorsey built the first house there. In 1812 the executors of Mahlon Janney surveyed and sold the lots from Patrick St. to Factory St., extending the entire length of High St. and Second St. This later development was known as New Town and continued to be called that until the most recent times. It was all of this area that was covered by the Act of 1818.

At this time also a town sergeant was named as a necessary officer of the town, to be appointed annually by the trustees.

Waterford was officially incorporated by the Virginia Acts of 1836, which established a town council of nine men who, from their number, elected a mayor and a recorder. Their duties, in addition to those already set out in the acts of 1817-1818 included establishing and organizing a ,fire company and purchasing engines; regulating, paving and graduating streets and alleys of the town; licensing ordinaries and their rates; preventing the firing of guns and running of horses; licensing and regulating shows and other public exhibitions; levying fines on those creating a nuisance, public or private.

They could lay and collect taxes on persons and property. Property taxes would not exceed 5% of the yearly rent or the value of the property in anyone year nor 75¢ on each tithe able person. In 1840 a tax of 20¢ on each hundred dollars of valuation of property was established.

The council spent a good deal of time during the first year just getting organized. In July they arranged to rent a room over the shop of Moses Janney for their meetings. Janney was to be paid $3.00 for the use of his room for ten months and merchant Ephraim Schooley was paid 62¢ for candles to light the room; this being noted in the minutes of April 15, 1837. The council also purchased nine chairs - apparently townspeople who wished to attend the meeting had to stand - and paid the monumental sum of $5.18 for the lot

Action taken by them during 1836 included the establishment of a board of health and levying of a tax of 25 ¢ on each family to purchase lime to use in making homes and shops more sanitary. In September they appointed a committee to examine and repair the "foot pavements" and also recorded an order that no human body might be buried within the town limits and that no interference was to be made with either of the two graveyards already established. These graveyards still exist - the Friends' Cemetery near the Meeting House and the Waterford Union Cemetery on Fairfax Street just beyond the old elementary school.

On May 5, 1837, the second election of officers was held and the same councilmen were reelected. In this year the first head tax was ordered, an assessment of 25¢ on each male sixteen years or older.

It must have been a dry summer, for in July, 1837, a committee was appointed to purchase ladders for the use of the corporation and another committee was named to inquire into the practicability of making a reservoir in the town square for the extinguishing of fires. The following month an ordinance was passed fining any housekeeper $2.00 who allowed "her" chimney to catch on fire during dry weather. Another interesting action later on was the purchase of a lock and chain to put on the town ladders which had been purchased in July, showing that even in those days people borrowed things and forgot to return them.

At some time a town market place had been erected, although no mention is made in the minutes of the council of its construction. We know of its existence, however, because of the search by the council for a suitable meeting place. Why the ,room over Moses Janney's store became unsuitable is not known, but during the year 1844 several council meetings were devoted to the subject of procuring or constructing a building suitable for the use of the council. Finally, on June 22, 1845, plans were accepted and after a subscription list had been circulated to procure the necessary funds, $350 was secured to repair a room over the old market place.* This building was situated on the Village Green at the foot of the big hill and little is known of its construction.

Later Acts of the Assembly relating to the town of Waterford were those passed in 1852, which added the office of town sergeant to the list of elective offices, and those of 1875, which brought the town under the provision of that part of the 1873 Code of Virginia which related to towns of less than 5,000 inhabitants.

The Acts of 1875 also provided that the council should have a survey and plan of the town made, showing its boundaries, public streets and alleys, with such explanations or remarks as they deemed proper. This resulted in the well-known map of 1875 by James S. Oden. This map was adapted in 1943 by Clare B. Metzger for the charming pictorial map which she drew of the town. It was printed and sold by the Foundation, tinted and framed copies of it hang in many Waterford homes.

Probably the most interesting "legislation" about the town of Waterford was the Ordinance of July 3, 1875 issued by the town and printed by the Enterprise Print of Hamilton, Va. It contained fifteen ordinances regulating practically every phase of life; an interesting commentary on the complaints we now hear about governmental regulation and control.

These ordinances made it an offense and established fines to punish those who engaged in obscene language or conduct, profane cursing or swearing (apparently cursing and swearing was all right if it were not profane) drunkenness, fisticuffs, or making loud noises. Moreover, fast riding or driving through the streets and riding or driving on the sidewalks were punishable offenses even then! What would they have done with sports cars and motor bikes.

It was against the rules to explode gunpowder, use fireworks, fire arms, play ball(!) or throw stones. Today this would really throw a crimp into the antique weapons displays during the Homes Tour and Crafts Exhibit and play hob with the Little League.

In 1875 an early zoning ordinance stated that in order to erect or remove any building, other than a dwelling house on one's property, one had to make application to council, which only granted such privilege when it did not "endanger the property or health of the objecting parties". Moreover, one was required to keep his sidewalks free of weeds and other debris or be subject to fine. This seemed rather at odds with the provision that keepers of livery or other stables were not permitted to throw more than one cart load of manure into the street at anyone time between June and November. Certainly, this must have encouraged the growth of the weeds to which they objected.

The forerunner of off-street parking requirements for merchants building new stores was encompassed in the ordinaries that required all persons engaged in business to provide racks or other hitching places for horses on their own premises as necessary for the accommodation of their customers and prohibited hitching horses to gates, fences or trees.

Probably the most onerous duty of the town Sergeant was that imposed by the section which prohibited hogs from running at large within the, Corporation limits and which required the Sergeant to take possession of and impound such hogs. It would have been so much easier if he could have just shoo-ed them over the town line.

There were other ordinances, as well, and these continued in effect until the dissolution of the corporate form of government in Waterford in the 1920's.

* Bowman. Fern P. Waterford in the Second Hundred Years of Her Existence.