Special election to ban cows from the streets

The first automobile comes to Waterford

The Automobile Comes to Waterford

An excerpt from the book, The Burning Cow Question and Other Tales From The Waterford Town Council 1891-1909, edited by John M. Souders. About this book 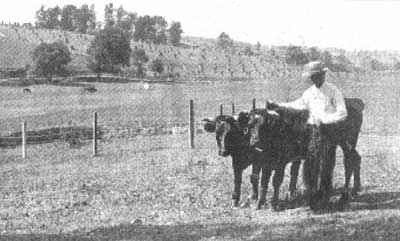 Yoked bullocks on a Waterford farm - on their best behavior

From its beginnings in the 18th century Waterford had always been a farm town. It owed its prosperity and very existence to those who tilled the surrounding fields. Several of the townspeople were themselves farmers whose properties abutted the village. Many others in town kept chickens, a family cow, and a hog or two to supplement the family diet and income-and of course they had horses.

So from the beginning citizens had always shared their space with livestock, which regularly had the run of the streets. More often than not, residents fenced their properties to keep animals out, rather than in.

By the end of the century, though, change was in the air. The railroad and other technologies had brought unprecedented contact with the wider world. And with that contact came a growing appetite for manufactured goods in preference to traditional home- made items and for a more forward-looking, cosmopolitan way of life. The old country ways no longer seemed so appropriate to the times.

In the new era, Waterford's "free-range" cattle and hogs began to be seen more as nuisances than familiar necessities. Townspeople were less tolerant of episodes like that in the early years of the century when an old sow had wandered into a house and dragged a toddler out into the street before she was rescued. [The child was Rache11Villiams (b.1814), sister of William Williams, both of whom lived all their lives in the house [15606 Second Street their father had built. Councilman Frank Steer's wife Mary recounted the incident in her famous poem Old Memories.]

Not surprisingly, pigs were the first to be officially rounded up.

Article 10, Sec. 2. Be it ordained . . . that hogs shall not be allowed to run at large within Corporation limits.
Town Ordinances, 1875.

Then, at a special session on April 8, 1893, it was moved and seconded that stock consisting of Cows, Horses & Hogs be prohibited from running at large in the Corporation from between the hours of 8 o’clock P.M. and 5A.M

Eight years later, the council eased the cattle curfew. On May 6, 1901, the Ordinance relating to the matter of cows running at large within the town of Waterford was amended and re-enacted as follows-That it shall be unlawful for cows to run at large within the corporate limits of the Town of Waterford between the hours of eight o’clock P.M. and five o’clock A.M. from the first day of May until the twentieth day of Nov (inclusive). The penalty for the first offense shall be a fine of fifty cents, and for repeated violations of this ordinance the Mater may in his discretion impose a fine of as much as two dollars. The Recorder was directed to have 100 copies of this ordinance printed and to post a number for the information of the public.

By 1904 the champions of agrarian tradition were again in retreat. In February, burning cow question was discussed earnestly and at length and though no action was taken it appeared that the majority of the council was decidedly averse to the idea of cows being permitted to run at large at any time.

Special election to ban cows from the streets 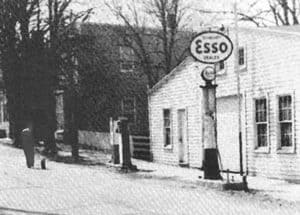 The livery stable on Second Street was converted to a garage

To settle the matter, the council decided to take it to the voters. In view of the many complaints of the cow nuisance it was ordered that a special election be held on the sixteenth of March 1904 to take the sense of the voters in regard to a proposed ordinance restraining cows from running at large within the corporate limits of the Town of Waterford.

The outcome was never in doubt. At a special election held March 16 1904 the majority of voters having voted against cows being at large within the corporate limits of the Town, the following ordinance was adopted. Be it enacted and ordained by the Mayor and Town Council of Waterford, that on and after the first day of May 1904 it shall be unlawful for horses cattle or cows to run at large within the corporate limits of the Town of Waterford without an attendant. The penalty for the violation of this ordinance .shall be .50 cents for the first offense, and $1.00 for each subsequent violation. These were not trivial fines-one dollar was a full day's wage for many villagers.

Even that was not the end of it. In 1906 a further ordinance decreed that it shall be unlawful for any person to use the streets of the town as a training or breaking ground for horses or colts, and the owner or trainer of any such horses or colts while breaking or training them shall be allowed only such use of the streets as will enable them to pass from the place where any such horses or colts are kept to some place beyond the corporate limits of the town. The penalty for the violation of this ordinance shall be a fine of firm one (1) to five (5) dollars in the discretion of the Mayer or other officer tying the case.

By 1911 the revolution was complete. In that year the final entry in the treasurer's account with the Corporation recorded an expenditure of $1.50 for automobile signs. In a Faustian bargain that forever changed-and still bedevils-the little village Waterford had traded its cows for cars. 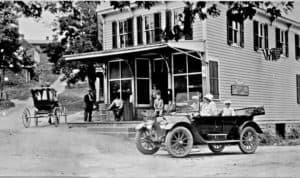 The handsome Cadillac motoring past admirers at the Corner Store above is a 1912 model belonging to Robert Walker, the wealthy Quaker businessman who lived at Huntley on High Street. Mrs. Walker is chaperoning her daughter who is driving.
The man sitting wearing hat is Charles Merchant, the man standing is doorway is "Hoss" Merchant, the boy on bread box is Earl Brown, the man driving car is Maurice Hough, the woman in front seat is Miss Cornelia Walker, and the woman in back seat is Mrs. Robert Walker.

The first automobile comes to Waterford

The first automobile to enter Waterford was a one-cylinder, chain-driven Maxwell owned by Fenton Fadeley, Sr. He was nearly mobbed by the crowd drawn to the blast from his horn as he passed through town on the way to Rosemont, his nearby farm. Young Fenton, Jr., soon set a precedent all too familiar to parents of later Waterford generations: he was caught speeding through the village at the breakneck rate of 20 miles per hour, and duly fined in the council office at Isaac Hough's place.

The second automobile in the village was a more utilitarian Chat resembled an old spring wagon, with hard rubber tires. The owner was the former mayor, D.H. Vandevanter. Dick was characteristically generous with his car, and would often haul the children of Waterford to Paeonian Springs. Or, rather, a driver did the hauling. Dick himself never took the wheel.