The first bank in Loudoun County

Transitions as a commercial center

In 1801, the village of Waterford – which had begun life as the village of Janney's Mill--received its official name with the establishment of its post office. The Waterford Post Office, the third oldest in Loudoun after Leesburg in 1793 and Middleburg in 1797, was a tribute to the industry of the Quaker families who began settling the area around Janney's Mill in the late 1730s.

Although common today, the name "Quaker" was an epithet when it was first used in 1647 by English Protestants who saw members of the faith dancing and "quaking" under the influence of the Holy Spirit. When the faith was organized in 1666, it became known as the Religious Society of Friends, and members addressed each other as "Friend." Only by the early 19th century did they begin using the word "Quaker" to describe themselves.

Janney's Mill became a Quaker village under unusual circumstances. Quaker surveyor Amos Janney had emigrated in 1732 from Bucks County, Pa., to what was then Prince William County to assist Thomas 6th Lord Fairfax in surveying tracts he wanted to sell. He had just surveyed a 703-acre parcel for two land speculators when Fairfax's real estate agent died. Fairfax stopped the sale for more than a year, time enough for one of the buyers to lose interest. 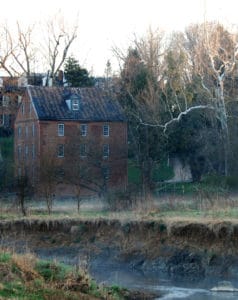 So it was Janney who bought 400 of the 703 acres, taking it in lieu of a surveying fee. He knew that the proliferation of oaks, poplars and walnuts on the tract meant prime soil, and in Colonial Virginia, an owner of 400 acres was considered a planter, not just a farmer. In 1743, Janney's brother-in-law, Francis Hague, bought the remaining 303 acres, and in the center of both tracts would be Janney's grain mill.

Janney soon acquired an additional 4,875 acres in that area of what would become Loudoun County, and another Quaker, surveyor John Hough, amassed 5,451 acres. Hough settled just northwest of the village of Janney's Mill, Janney to the southeast. Sections of their initial homes survive; Hough's is now called Corby Hall and Janney's is known as Talbott Farm.

Most of the Quakers came from the counties surrounding Philadelphia, having first moved into what was known as West New Jersey in 1677-78 to escape religious persecution in England. By the 1730s, land was growing scarce and becoming expensive in Pennsylvania. The prolific Quakers looked south and began settling in Maryland, the lower Shenandoah Valley and Loudoun. Generally, they were well off, and in Loudoun, most were able to buy tracts of more than 400 acres.

Geographically, Janney's Mill, despite its fine soil, was an unlikely spot for a growing town. It was not on a major road, and its stream, the south fork of Catoctin (initially spelled Kittocktin) Creek, was no more than 50 feet wide. And when Loudoun County was formed in 1757, the county's courthouse town, Leesburg, was a scant 5 1/2 miles away.

But the Quakers were a dogged lot. Blacksmith shops and stores followed the ever-enlarged and improved mill, and by 1806, there was a second mill, giving rise to the village's nickname, Milltown. For spiritual growth, a log Friends meetinghouse was erected about 1743, became a substantial stone edifice in 1761 and was enlarged to twice its original size in 1771. By 1809, a schoolhouse opened next to the meetinghouse.

The Friends Meeting took the name Fairfax in 1745, honoring the county it was in at the time, though Loudoun County would be carved out of Fairfax 12 years later. Some people called the village Fairfax; others stuck with Janney's Mill. Tradition holds that Thomas Moore, a Quaker whose forebears came from Waterford, Ireland, settled the matter by coining the present name.

Amos Janney died in 1747, leaving his estate to his sixteen-year-old son Mahlon. Within a few years young Mahlon replaced the original log mill with a new two-story structure of wood and stone. This second mill was erected on the site of the present brick mill. The county began to build and improve local roads to facilitate the movement of goods to and from Janney's Mill and, by the time Francis Hague died in 1780, the tiny village had begun to grow rapidly. Amos's cousin Joseph Janney bought 12 acres from Hague's estate and promptly laid out 15 lots on the south side of Main Street from the mill almost to the site of the present post office. Shops and dwellings soon followed, and sometime in the 1790s the growing village was renamed "Waterford."

In 1800 Mahlon Janney extended Main Street up the "Big Hill" by subdividing his property there into an additional 17 lots. And when Mahlon died in 1812, his executors divided his land between Second and High Streets into 64 more parcels.

Through the end of the 18th century, Waterford and its fertile hinterland continued to attract Quakers from Pennsylvania. And, increasingly, the Quakers were followed by Scotch-Irish Presbyterians and German Lutherans, also from Pennsylvania. Baptists and Methodists came too, adding to the lively social and ethnic mix. Besides their heritage and religious beliefs, these people brought their crafts and skills with them. Waterford became a bustling commercial town, supporting and serving a prosperous quarter of rural Loudoun County. By 1762 the ethnic mix included African-Americans, some of them slaves, but others, especially after the turn of the century, free blacks—a relative rarity elsewhere in Virginia. By 1830, African Americans headed a fourth of Waterford's free households; many of them owned their own homes.

Most of Waterford's houses were built in the first quarter of the 19th century, when the town grew rapidly as a commercial center. Many of the structures that survive today as dwellings began as shops or stores. The architecture from this "Federal period" dominates the town, but examples from other periods appear here as well. 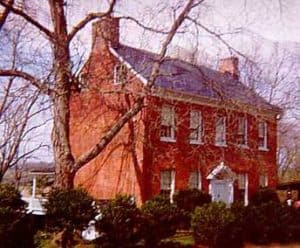 By 1815, Waterford, its population approaching 400, was the second-largest town in Loudoun and Fauquier counties. That March, the first bank in either county was organized at Waterford. Loudoun Company was headquartered at the home of Isaac Steer, still known as the Bank House (40149 Main Street).

All banks during this period--and until 1928--were authorized by the state and federal government to issue their own paper currency, and residents trusted notes bearing the signatures of local bank officers. The Loudoun Company issued "tickets" in denominations of 5, 10, 25 and 50 cents and "notes" of $5, $10, $25 and $50. This local currency was exchanged for foreign gold pieces, quite common in that era, gold bullion and for U.S. currency if the customer didn't object.

Trouble started when the state suspected irregularities at an unchartered bank in Martinsburg. In February 1816, the Virginia General Assembly prohibited the circulation of notes issued by unchartered banks, and this included the Loudoun Company, for it had neglected to apply for a state charter.

Calling the state's action "a recurrence of Legislative oppression" and an "abridgement of the natural rights," the Loudoun Company protested the action in a resolution printed in Leesburg, Alexandria and Winchester newspapers, though the protests came to naught.

In September 1816, the Loudoun Company's directors petitioned the state legislature for a charter but were denied. The Bank of the Valley in Virginia also wanted a charter and asked the legislature to approve a branch "in either Loudoun or Fauquier." The Bank of the Valley received its state charter the next year and opened a branch in Leesburg in 1818, effectively sinking the Loudoun Company.

Waterford's second commercial "first"–Franklin Library–fared better. Organized in the early 1820s, the subscription library was at the Friends meetinghouse or school and was named for Benjamin Franklin, who established America's first subscription library in 1731. For a dollar or two, one became a patron of the Franklin Library and was entitled to borrow books for two weeks at a time. One of the library's books, "Early Impressions," a collection of Quaker reminiscences by Jane Johnson, notes on the flyleaf that after 14 days, "1 cent per day is charged." The book was printed in 1844, indicating that the library lasted for some time, but for how long is unknown. 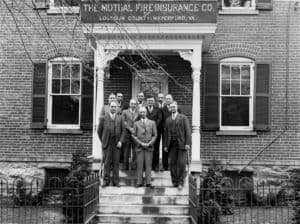 Loudoun Mutual Insurance Company at Patrick and Second Streets; occupied from 1901 till 1949.

The village's third pioneering enterprise, Loudoun Mutual Insurance Co., was founded in 1849 and incorporated by the General Assembly. The first policy was issued for the house once lived in by Amos Janney, then owned by James M. Walker. Loudoun Mutual still writes insurance on the house. More on the company's history »

But Waterford would produce no more firsts in the way of commercial enterprises. Writing about how his town appeared in 1820, William Williams, an officer in the insurance company, recalled: "Every unnatural stimulus is followed by as great prostration, Waterford about this time suddenly ceased to improve"--though its population did not peak, at 521, until about 1840.

The reasons for the town's stagnant commercial progress were, in the main, two:

Two years later, the Chesapeake and Ohio Canal reached the Point. That village, now linked with Baltimore, Alexandria, and Washington, became the main shipping point east for flour and corn meal. Farmers were now bringing their wheat and corn to mills close to the canal and railroad terminus. This activity increased in the next few years as the railroad and canal pushed westward to Berlin and Harper's Ferry. Previously, Waterford, with relatively close access to Leesburg and Conrad's (later White's) Ferry, had been the prime shipping point.

As to farm produce moving westward, by 1832 the Leesburg and Snickers' Gap Turnpike (today's old Route 7) was complete from Leesburg to the Shenandoah Valley. This new route, nearly three road miles south of Waterford, led to the demise of the "Great Road" west through the village. Simply, Waterford had been bypassed by two corridors of transportation. By 1860, the Alexandria, Loudoun & Hampshire Railroad reached Leesburg and pushed west past Waterford to Hamilton in 1868.

For those who remained in Waterford, the same industry and commercial acumen that had marked the rise of the village also promoted a material society and led to a waning of the faith. Morgan Hough, a descendent of John Hough, remarked that of his ancestor's 14 children, "some of them lost the light."

The Quaker faith was a strict one. Asa Moore Janney, a Loudoun Friends historian, often tells the story of how he researched Quaker ancestors for a woman in California. Reluctantly, he wrote her to say that they had been "kicked out of meeting for swearing, fornication and drunkenness." She wrote back: "Thank you very much. My family has done better since we joined the Methodists."