An excellent summation of the trials and tribulations of Waterford Quakers is detailed in The Waterford Foundation publication, To Talk is Treason, by John Souders, Bronwen Souders and John Divine.

More on these Quaker women »

Three Quaker maidens of Waterford, Sarah Steer (26), Elizabeth Dutton (Lizzie, 24), and Eliza Dutton (Lida, 19), determined that their zeal for the Union should not be suppressed, gave vent to their feelings by publishing a newspaper called The Waterford News. While their copy was sent across the river into Maryland to be printed, these clever maidens handled all of the other details as publishers: reporting, editing, and distributing. The first edition of this paper appeared in May 1864, and continued monthly through April, 1865. Strongly Union, it no doubt incurred the wrath of the Confederate sympathizers, but the purpose was "to cheer the weary soldier, and render material aid to the sick and wounded." From this small four-page affair we are enabled to look back across the century for an eyewitness account of daily life in Waterford.

These women had contrived a bold plan to strike back at their tormentors and at what they saw as the criminal wrong-headedness of the Rebels. They set out to create a defiantly pro-Union newspaper inside Dixie. The first four-page edition of their Waterford News appeared on May 28, 1864. It was printed in Maryland by the Baltimore American-the editor was an old friend of John Dutton’s. 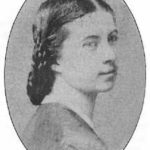 The young women declared that their objectives were to "cheer the weary soldier, and render material aid to the sick and wounded." Proceeds from the 10 cent price were distributed to the U.S. Sanitary Commission, a non-government organization formed in 1861 to provide health and medical care to Union troops. In addition to their stated goals the three young Quakers undoubtedly intended to persuade Federal authorities to lift the blockade for loyal Loudouners who were suffering its effects. They may even have hoped that in publicizing Waterford's plight they could induce the Union to garrison the beleaguered village.

Although by 1864 the main lines of battle had passed to the south of Loudoun County, publication of such a brazenly anti-secession paper took courage. Confederate partisans-particularly Mosby's - remained frequent scourges in Waterford to the bitter end. The young women themselves described their underground newspaper as a "hazardous undertaking."

The pluck and wit of the editors soon had the desired effect. The little paper's fame quickly spread beyond Loudoun County. It was praised by Horace Greeley's New York Tribune, and a Maryland regiment passed along the first editions to President Lincoln. The accompanying letter to the President reported that the "fair Editresses" had by late June already raised nearly $1,000 for the Sanitary Commission. That amount implies a substantial press run.

The newspaper was issued eight times during the final grinding year of the war. The last edition appeared less than a week before Lee's surrender at Appomattox. After the war the Waterford Newswas quickly forgotten. The village itself took years to recover from the effects of the rebellion, and many of those who had fled to the north and west-particularly the Quakers-never returned. Moreover, Confederate veterans and their sympathizers soon reasserted their political predominance in Loudoun County. They certainly had no incentive to keep alive the memory of the Unionist paper.

A strict blockade had been maintained since the first of the year; and with the five Waterford stores long since closed, the first edition of this paper ran want ads, such as: "A great big, Pound Sponge Loaf, or Ginger Cake, to be distributed amongst the Union Ladies of Waterford, who haven't tasted any for a long time."

"A Few Stores; with dry goods, molasses candy and other stationery, suited to the tastes of the community. Young and handsome CLERKS not objectionable."We find in the June issue great joy, for the blockade had been partially lifted.

We know that the effects of war did not alter Lida, Lizzie and Sarah's resolve, so it should come as no surprise that when peace came they continued to "do life justice."

Sarah Steer applied to the Freedmen's Bureau and the Philadelphia Meeting and to local Quakers for the funds to open a school for the children of freedmen. The school was built in 1867, the first of five in the County, but Sarah didn't wait for the walls to go up around her. She began teaching from her side yard in1865 and so became the "first teacher of black children" in Loudoun County. The school building is now an historic property known as "The Second Street School." 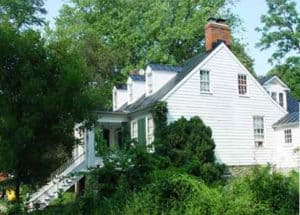 Sunnyside, the Dutton house on Second Street where the Waterford Newswas written

So what of Lizzie and Lida Dutton after the war? Apparently they continued to write, submitting poetry and articles to local newspapers on occasion, but life had a few surprises left for each of them. Lizzie continued to live in the now quiet village of Waterford, and we might forgive her for assuming the exciting portion of her life was over.

There had been one fleeting correspondence between herself and a Lieut. James Dunlop of the 7th Indiana, a friend to her fallen fiancé and the very man who'd written her with news of his death. But, after the war, Lieut. Dunlop had gone home to Indiana to marry his childhood sweetheart. However, fate decreed Dunlop's wife would die within two years of the marriage. He never remarried, and for years he let the thought nag him: "Whatever happened to Lizzie Dutton?" In 1881, he came to Washington on business and used the excuse to send a card to the Dutton home. The reply was a letter from Miss Lizzie Dutton. He took himself straightway to Waterford. An account of the event reads that as the two renewed their acquaintance, "...matters flowed on so easily, smoothly, and naturally, that in a few weeks Mr. Dunlop found himself at his Indiana home busily engaged in preparing for the reception of a new mistress, and soon the little town of Waterford was all a blaze of light and a scene of general rejoicing, for the lady was popular and beloved by all." Joseph Dunlop and Lizzie Dutton were married on January 22, 1882

Last, but not in the least least, there was the story of Lida and that Union Lieutenant. When young Barbara Black was on her grandpa's knee listening to the tale, there would always come a point where her grandmother would interrupt the telling. That part about the promise. When her Grandfather would say Lida promised that Union Lieutenant she'd love him if he were a Northerner, her grandmother, often blushing, would protest in her soft Virginia drawl that she'd said like and not love. Despite this, in the dozen times Barbara heard the story, her grandfather, John William Hutchinson, never felt the need to change the facts of how he met his Quaker bride. He also never felt the need to hold his grand-daughter with both hands; his other hand would almost always be holding Lida's.

Like him or love him, when William came back for her after the war, she married him. He joined the Quaker church and moved his bride north to New York where they continued to hold that cheerful argument in front of their children, then their grandchildren, and, eventually, their great-grandchildren. William and Lida were man and wife for 53 years before he passed away.

Of the editors, Lizzie and Lida married Union veterans they had met during the war; they left Waterford for Indiana and New York, respectively. Sarah remained in the village and was the first teacher at the new school for black children that was opened in Waterford immediately after the war with the help of Quakers and the Freedman’s Bureau. She eventually married in 1904.