Founding of the Waterford Foundation

Waterford's stagnation as a commercial center after the Civil War meant it was not worth demolishing the old to make way for new development. The old town and its surrounding farms were able to slumber undisturbed, like Rip Van Winkle, for many years. By 1937, when the Historic American Buildings Survey was completed in Waterford, most buildings in the village were falling into disrepair – or falling apart.

By then, however, new life had begun to stir. There was a trickle of people from the Washington area who appreciated Waterford's picturesque buildings and rural setting. Some built new houses along Second Street as vacation homes; others renovated older structures throughout the town. A number of families around this time—Edward and Leroy Chamberlin, McDaniels and Stablers, to name just a few—went to great lengths to preserve Waterford's buildings, traditions, and rural setting.

These restorationists established the Waterford Foundation in 1943 to "revive and stimulate a community interest in re-creating the town of Waterford as it existed in previous times with its varying crafts and activities.

Another 1943 milestone was the creation of the Waterford Homes Tour and Crafts Exhibit (now called the Waterford Fair) by the Foundation. Started to showcase local crafts people, this annual event now draws some 10,000 visitors for three days starting on the first Friday every October. 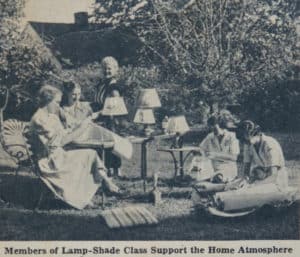 Many Waterford residents were involved in some craft activity

The Foundation has played an important role in revitalizing the physical fabric of Waterford as well as increasing the public's knowledge of life and work in an early American rural community. In 1970, Waterford and 1,420 surrounding acres were designated a National Historic Landmark.

The Waterford Foundation has as its dual mission the preservation of the historic buildings and open spaces of Waterford and educating the public about life and work in an early American rural community.

How did the Waterford Foundation get started? By the hardest. We bought our farm in 1937. The house was in such a state of dilapidation that there was no living in it, but we'd come up for weekends and camp out. After school closed and the children went off to camp my husband Paul and I would move up for the summer. Living the simple life for sure. Paul who boasted of his Indian blood thought the cruder the better. The first summer we cooked our meals over "Indian fires" on the front lawn a circle of stones with wood burning in the center and the pot sitting on a trivet. We boiled our breakfast eggs in the coffee pot while the coffee boiled. Many prehistoric things like that.

With no housekeeping to do since there was no house to "keep", I rode around the countryside making the acquaintance of the world in which we planned to live. We knew nothing or nobody. Mr. Lintner, the County Agricultural Agent, whom we knew through my sister Stan's then rampant romance with one of the Lintner sons, had told us of the farm. We fell in love with it on first sight and became residents-to-be knowing nothing of the community or its inhabitants.

In my rides through the country I happened upon Waterford and lost my heart. I grew up in the western part of Kansas and probably had never seen anything in the way of buildings more than fifty years old. Ours was homesteading country vast and treeless and pockmarked with heaps of sod; the relics of a once-sod house, or a hole in the ground where once a dugout had made a home for some hopeful homesteader who had been starved out and gone his way.

No one knowing Waterford now can imagine how it looked in those days. The Mill had stopped working a few years earlier. Most every building looked as though it was about to fall apart. The Mark Beach house was a disaster with the roof caved in; it stood amid a jungle of weeds, forlorn and abandoned. It seemed a truly deserted village. Somewhere along the line Roy Chamberlin was restoring the Arch House the only sign of life. A little later he started restoration on the Quaker Meeting House which the Allen McDaniels had purchased for their home. 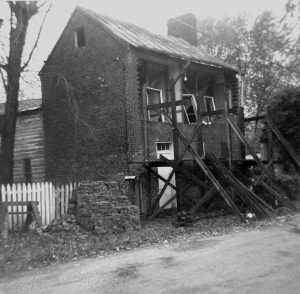 Many of the houses in Waterford VA in the 1930's were in a state of disrepair. This photo of the house at 40135 Main Street is such an example.

Waterford haunted me it was like finding an abandoned child. You wanted to take it home, love it and try to save it from complete disintegration. I haunted the place sick with anxiety for its future. Came 1940 and the war. We had moved in then while the house was being restored still not knowing anyone in the community. We bought our groceries at Flippo's store but went to Washington for everything else.

A need for medical care led me to Dr. John Gibson who told me the way to get to know folks was to go to the Sanitary now the Safeway and get into Red Cross work. So I started rolling bandages and the like at the local Red Cross Center and soon found myself committed to several hours a week manning the Airplane Warning System housed in the old Opera House which stood where The Hub now stands. The building was otherwise abandoned and I'd take my portable typewriter along and catch up on correspondence. There never was an enemy airplane alert so I had plenty of time to do my own thing.

But the Opera House was not entirely deserted. One day my door opened and a smiling, gracious lady came in. She said she was the Executive Secretary of the Red Cross for Loudoun County, Mrs. Fred Stabler, and that her office was down the hall a piece. She had heard my typewriter pounding away and wondered if I would have time to do some typing for her office.

So developed my first friendship with a citizen of Loudoun County. Soon I learned that she lived just outside Waterford and my zealot fires burned brighter. I told her how deeply concerned I was about the village. She shared my enthusiasm for its charm and antiquity and I stated that someone ought to do something about saving it for posterity. She heartily agreed and this became our main topic of conversation. But where to begin. We had no money knew no one who would share our enthusiasm but we cherished the dream in our hearts and hoped that we would find a way somehow.
One Memorial Day morning Mary drove into our yard. I went out to greet her and without getting out of the car she said she had found some money to start us going. Fenton Fadely and his mother had offered us a loan.

We were off and running. Such planning and scheming and groping for direction!! And such a fever of excitement and high hopes' A Board of Directors my lawyer husband said was the first requisite. We decided to ask town residents of long standing as Board members thinking they would be the basic stalwarts who would share our enthusiasm and help us get going. This was not always the case. All invited to join did so mainly out of curiosity, I suspect. For we found that most of them felt Waterford was a lost cause and would better be burned down and rebuilt than to try to salvage the disaster it was. Anyone who thought otherwise was balmy. We were "new people," of course, and deeply suspect therefore. Mr. and Mrs. Allen McDaniel also "new people" were invited. He was the Architect of the Bahai Temple in Wilmette, Illinois, and we felt would be an able and inspiring member. He was our first President, and a tower of strength and spirit he was.

It was decided to take our first money and purchase the Old Mill which was the hub and heart and reason for being of the town. Then what to do with it. There was talk of making it into a restaurant, thereby, hopefully, making more money that we could use for further development. But who would ever find their way to the place. Leesburg was a quiet, inactive little town at that time, people didn't move about as they do now. The plan was ultimately abandoned (to the great relief of the old-time citizens on the Board).

I had only one burning passion to restore the Mill to running condition, and sell water ground meals. The old Fairfax Mill was operating at that time. We always stopped to buy things there. The Pierce Mill in Rock Creek Park was operating to good advantage. I have a complete horror of a needle and knew I was going to be asked to do something that would involve one. Someone, somewhere had mentioned lamp shades as a possible craft item. Quickly, before I could be asked to take on something special, I spoke up saying that I knew nothing whatever about making a lamp shade — but I would be glad to look into the matter and find out what would be involved for someone else to pursue.

Famous last words. For 16 years I headed a lamp shade shop and conducted classes in lamp shade making. Home Demonstration groups came en masse, others from Washington, Falls Church and far-away places. I am told that to this day people come to the Exhibit, bearing a lamp to have a shade made.

Meantime, others were conducting other craft classes and thus the nucleus of our present Arts and Crafts Exhibit was born.

Reprinted from the Waterford Fair Booklet of 1981.