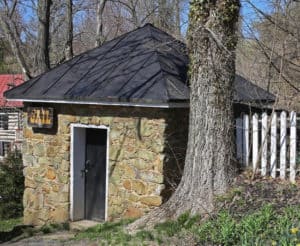 This sturdy stone jail with its pyramidal roof attests to the flexibility of this type of structure. From the colonial period through the 19th-century numerous outbuildings were built following this simple formula. The jail housed many an inebriate and petty thief from its construction through the end (1936) of Waterford's incorporation as a town.

The only public property ever owned by the Town of Waterford is now the village green at the intersection of Main Street extended (Market Street) and Water Street. The lot containing 7723 square feet was conveyed to the Trustees of Waterford by Mahlon Janney on May 18, 1812. "For and in the consideration of $1.00 with a desire to benefit the town" - "To build a market house, jail or any other public building forever for the benefit of the said town of Waterford."

The little stone jail and a frame market house were built soon after. The jail survives but we know little concerning the market house. Its purpose was to provide a sale mart where producer and consumer met. We do know that it was a two storied building for the minutes of the Town Council in 1835-36 mention "fixing up the second floor of the market house as a room in which to hold our meetings." 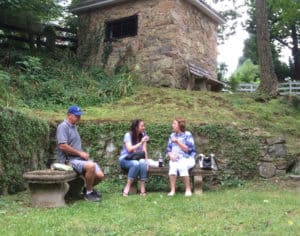 Visitors by the Jail

In by-gone days this jail housed many of Waterford's "desperate criminals" - inebriates and chicken thieves. The thieves were sent on to the county jail, while the intoxicated were kept until sober and then put to work repairing and maintaining the streets until the fine was worked out.

One of the favorite stories in connection with the jail happened in the afternoon of one Christmas Eve when the Town Sergeant went in to sweep and build a fire for the occupants expected later that evening. While attending to this chore several of his intended victims locked the door on him where he remained for several hours until he could attract the attention of a passing citizen.

While long ago it fell into disuse, it remains a monument to Mahlon Janney's desire to benefit the town.