Recollections of the Building of A Barn in 1923

By L. M. McGavack in an article from the 1969 Waterford Homes Tour and Crafts Exhibit. 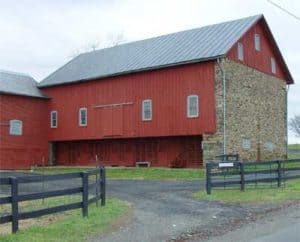 Mark Twain once said that a farm consists of a creek for swimming, a hayloft for sleeping, out buildings for exploring, and an assortment of haystacks to relax in.

There are still some old farms in Loudoun County but the look of a tiny village with the grouping of many buildings around a main house is all but gone.

Often as much pride was put into building the main barn as was put into building the farm house. In fact the reason the barn and clusters of outbuildings were actually as much a part of the household as any room in the farmhouse. One of the last barns near Waterford was so built in 1923, on the farm of J. T. McGavack about four miles west of town.

The contract called for a stone basement, seventy feet by forty feet. The superstructure was to be white oak; standing twenty feet from sills to eaves. The contractor was John D. Spinks of Paeonian Springs, Va. Mr. Spinks, then a man in his late seventies, had no formal education, but was possessed with an uncanny ability in mental arithmetic and design. No blue prints were used - he worked entirely from memory as to what had been told him would be needed.

His first step was to select his timber. This he did from the standing oak trees which surrounded the barn site. The sawyer was instructed as to length of each log, then as to width and thickness of each plank from that log.

The logs were "snaked" to the mill by mules hitched to a jump cart. The sawyer was Wesley Jacobs who also operated a grain threshing outfit. The power for the mill was furnished by a Peerless steam engine.

As the girders, sills, purlins, rafters, and braces came from the sawmill they were cut to exact length, mortised, tenoned and holes bored for the wooden pins which would eventually hold them in place.
There was not a nail to be used in the framework. Literally hundreds of pins, ranging from one-half to one inch in diameter and six to twelve inches in length, were fashioned. The supporting sills were twelve by twelve, twenty feet long, the joists were two by twelve. The rafters were two by six, supporting posts six by ten and eight, the braces two by six and purlins six by eight. Each piece was fashioned on the ground and left there until the whole framing was complete. These timbers were placed about on approximately two acres of land.

The workmanship was so complete and exact that the erection took place without a single alteration. Heavy hammers were used to force the tendons into the mortised ends and then drive the wooden pins through these joints. After forty years this frame work seems as sturdy as when built.