By Kathleen Hughes for the Waterford Foundation 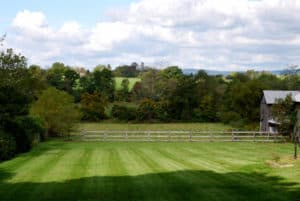 Looking out onto the Phillips Farm

"Good farmers are the best assets a State can have," wrote the Virginia Commissioner of Agriculture in 1906. "The products of Virginia farms are now worth seventy-million dollars per year, and Virginia is the wealthiest state in the South except Texas. The soil-is the basis for all wealth and prosperity. This was certainly the case in Waterford, Virginia, from the very beginning.

In about 1733, Quaker Amos Janney from Southeastern Pennsylvania, found the fertile land and waterpower he was looking for along Catoctin Creek in Virginia among Lord Fairfax’ vast holdings. He was able to buy 400 acres in 1735 or 1736. Following in his footsteps were his Quaker friends and their families, Thomas Johns, Edward Norton, Samuel Harris, Thomas Bourne, Francis Hague, and John Hough. Quakers were moving down from Pennsylvania and New Jersey at this time because their initial land grants from William Penn were too small to support generations of their large families. Already located in the Waterford area were a few Germans and Scotch Irish on small independent farms. At first the Quakers and their neighbors worked industriously as farmers, but gradually these innovative people began to develop businesses based on the produce of the land to supplement their farm income.

Amos Janney built his first mill in 1741, the first of several eventually built along the Catoctin and its tributary Ball's Run, that ground the wheat and corn and sawed the wood which contributed to the prosperity of agriculture in the area. Livestock, as well as oats, buckwheat, and flax were the main crops of the region; rarely tobacco, the cash crop for much of the South. Mill records also indicate that "land plaster" or plaster of Paris was ground between field stones as fertilizer for the fields. According to Werner and Asa Moore Janney's "The Meetg Hous Mall," in approximately 1791, Quakers Phillip and Rachel Price of the Brandywine Valley in Pennsylvania, discovered that lime, land plaster, and stable manure helped barren fields to bloom again. The Quakers of Loudoun County traveled back and forth to Pennsylvania for the quarterly meeting; and it was probably during these visits that the new agricultural methods were talked about and ideas exchanged. The Janneys recount how Israel Janney brought lime back in his saddlebags from one such visit and sowed it on his oats and clover with great success.

In 1804, Waterford farmer and scientist, John Binns, published a second edition of his famous "Treatise on Practical Farming," which described a method for conserving and rejuvenating agricultural lands. In this treatise, which was praised by Thomas Jefferson and was part of his prized library, Binns describes the crop rotation and fertilization techniques that Waterford farmers were using so success- fully at the time. Binns was also interested in pest control. In the fall of 1800, he had observed swarms of flying insects that reminded him of wasps laying eggs on his wheat. His neighbors' crops had been damaged by these insects, but his had not-until the following spring. So, in the scientific spirit, he experimented and eventually discovered that if wheat were planted after the first freeze, the insect had nowhere to lay its eggs and was, therefore, unable to damage the crop.

In addition to innovation and industry, Quakers, German, and Scotch Irish settlers brought with them the agricultural methods of the small independent farmer which did not require slave labor. The Quaker religion disagreed with slavery. By 1860, Waterford had become a commercial center for its farm community, complete with shops, mills, taverns, and tanneries. But unlike most Southern villages, one- quarter of its inhabitants were free blacks, some of them property owners. Most worked as farm laborers and household workers, built fences, and participated in the life of the town. Life was not as easy in this Piedmont area of Virginia as along the Tidewater, since roads were poor and produce had to be carted all the way to Georgetown or Alexandria to sell. According to the Janneys' book, turkeys were driven on foot to market at Thanksgiving and Christmas. They could not have been very fat by the time they made the 45 miles to Washington!

The farmers of the Catoctin Farmers Club formed in 1868 talked not of politics, but of roads in their minutes. Transportation of their crops was still a major problem, although the railroad now reached Hamilton, Virginia, having bypassed Waterford at Clarke's Gap. Their minutes of 1869 describe their interest in building a turnpike from Waterford to Bowie's Station of the Alexandria and Harrisonburg Railroad. Eleven members of the club, when asked, pledged a total of $1,200 for the project. While Waterford's markets were traditionally Alexandria and Washington, D.C., when roads and railroads did begin to improve about the 1870s, these still industrious Loudoun farmers looked to world markets. By 1872, the Club passed a resolution indicating their awareness of the need for smaller farmers to band together to market their products: "We believe that the old method of farming for wheat has ceased to be remunerative and that a more careful and thorough culture of a diversity of crops and the introduction of fruit culture and Dairy Farming (so successful in other States) will largely contribute to our success."

Waterford's farmers received little help from machines until after World War II. The entire family, indeed the entire community, worked together when the wheat crop was harvested. Thomas Taylor of nearby Lincoln, descendant of an original Quaker settler, spoke of corn planting time when his father was a child. Boys were the planters, poking holes with sticks in the soil into which the corn kernels were planted: "Two for the cut worm, two for the crow, two to pull up and two to grow." Children also thinned the corn, since they were just the right height to do so when it was not "as tall as an elephant's eye." Mr. Thomas talked fondly of threshing time hen he was a boy in the 1920s. When the steam thresher blew its whistles, everyone came running. The thresher separated the wheat from the chaff and piled it in stack.