Waterford 4th of July, 1832
An Old-Fashioned Toast To The Nation's Birth 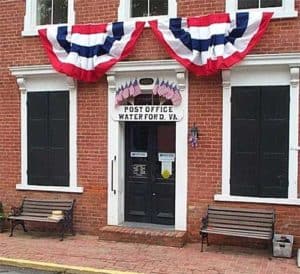 In the 56th year of our independence, Brook W. Sower, editor of the Leesburg newspaper Genius of Liberty, asked the organizers of festivities in four bellwether Loudoun County towns to send him descriptions of their festivities.  The four communities were Leesburg, Middleburg, Waterford, and Woodgrove.

Each unnamed correspondent recounted in detail the thirteen official toasts—one for each of the original states.  The master of ceremonies then asked others to add their snippets of oratory.
In Waterford the gala took place "at a spring near the town," and there the day passed "with great harmony and much hilarity, and good feeling." My guess as to the spring's location.  On the Spring Branch of Ball's Run, about 1,800 feet east of High Street.

Several of the Waterford toasts might be deemed unusual for a town of Quaker (supposedly pacifist) persuasion, but at least half of the town and surround's populace were of other Christian faiths.
For instance, Waterford toasted the Marquis de Lafayette, who fought in the American Revolution and visited the area (but not Waterford) in 1825.  Waterford was also the only town to toast the United States Army and Navy—and I'm sure the goblets were meant to be raised to the Marine Corps as well.

President Andrew Jackson, no favorite in Loudoun because of his opposition to the Bank of the United States received some boos from each of the town toast lists.  Jackson lost the 1828 vote in Loudoun to John Quincy Adams by more than a two-to-one margin. The powerful bank could finance the roads, canals, and railroads that enabled farmers to bring their milled corn and wheat to Alexandria and Baltimore.  At these seaports these and other staples commanded high prices (to feed a starving Europe) and the wagons could then bring manufactured goods and back to the countryside.

During this era, some of the vital transportation links to those cities were reaching the hinterlands.  In 1830 the Baltimore and Ohio Railroad reached Point of Rocks. In 1832 the Chesapeake and Ohio Canal reached The Point, and the Leesburg and Snickers' Gap Turnpike (old Route 7) was complete from Leesburg to the Shenandoah Valley.  Leesburg and Alexandria had been linked by the turnpike in the 1820's.

Waterford's S. C. Dorman, in an extemporaneous toast, added some levity:  "May a beneficent providence equally avert the cholera and the reelection of Jackson."

Dorman's toast was to naught, for even though Henry Clay trounced Jackson in Loudoun. he won his second term in 1832.
In another impromptu toast, townsman Thomas Bond compared South Carolina's nullification of federal tariffs with the recent appearance of Comet Pons-Winnecke:  "The first has passed away without disturbing the harmony of the planetary system; the second shall fail to destroy the power of traction between the United States."

Indeed the crisis passed the next year when Congress enacted a compromise tariff bill and South Carolina repealed its nullification ordinance.

An improvisatory toast was made to the Emperor of Russia:  "May a great light appear 'round the city of Warsaw, and a voice be heard saying 'Nicholas, Nicholas, why persecutist they sons of freedom.' "  Poland would not be free until 1918, and then for only twenty-one years.

Great Britain was the only other nation to receive a toast, from a Waterford guest.  Citing horrible conditions of child labor and the death penalty for thievery, he noted:  "Despotism may flourish for a while, corruption may extend to its lawful influence, but liberty and celestial influence must eventually triumph."

That year the British middle class received the right to vote.  A year later the nation abolished child labour, and in 1835 the British Empire abolished slavery.

The thirteenth toast in all the towns went to women, and Waterford's was most literate: "The American Fair [lady]—merit accompanied with beauty is a jewel set to advantage."

As to the Fourth:  "It stands alone, like Adam's recollection of his fall."