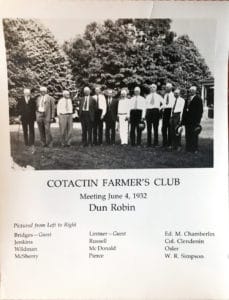 One of the many developments in agrarian regions during reconstruction was the rise of farm clubs. Advancements in agriculture stagnated during the Civil War; post war farmers were anxious to resume improvement activities. Continued economic instability after the war prompted farmers to look for new opportunities to stimulate growth. Farmers gained by working together through cooperative purchasing, shared equipment, shared lessons about pesticides and fertilizers, cooperative lobbying efforts in the local government, and the possibility to control farm-hand wages. For a brief time in 1875-1876 local farm clubs in Loudoun County united to form the Grange in Northern VA. The organization did not last long and quickly disassembled into several other farm organizations.

Throughout the 20th century, the Catoctin Farmers’ Club continued to deal with the same agricultural issues which faced farmers at the end of the 19th century. Insects, viruses, disease, and bad weather destroyed the profitability of crop and cattle alike. Veterinarian medicines, pesticides, herbicides, fertilizers, and seasonal forecasts were always common discussion points for the club. The club also closely watched for and encouraged technological advancements in farm implements and techniques. They often pooled finances to purchase new plows or other equipment.

Other discussion points and activities were sparked by the local and national landscape. During the home front efforts of WWII the club supported finding domestic sources for materials previously obtained from abroad, like growing rubber in the U.S. The club lobbied Senator Byrd for assistance when gasoline rationing crippled farmers, keeping them from running equipment. Other issues such as real estate became more complex throughout the 20th century as development rapidly picked up speed.

The club’s membership in the 20th century reflected some of these issues with which farmers dealt – many of the members as large estate owners were involved in real estate. Bankers, military officers, and prominent businessmen of Loudoun County also filled the club’s ranks. Influential members towards the middle of the century included Allen B. McDaniel (d. 1965), Hayden B. Harris – son of Chicago banker Norman Wait Harris – J. Churchill Newcomb (d. 1962), and General William C. Crane (d. 1978).