A Look At Life In Town

An 1870 Market Day in Waterford

Written by by George E. Bentley for the Waterford Foundation 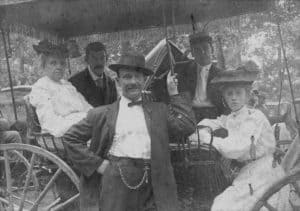 Ten years after Appomattox, the U. S. Cavalry was still fighting the Indians on the plains west of the Mississippi, the South was still feeling the effects of the War, and in the business world, large fortunes were being made.

But in the small town of Waterford, life was peaceful and serene, and the biggest excitement was on Market Day.

It was a prosperous village, with numerous shops and small businesses to serve the country about. In those days, the town could supply all the commercial needs of the farmers and townspeople, and so the number of shopkeepers, craftsmen and manufacturers increased with demand.

The housewife, shopping with her list and market basket on a Saturday, would visit Mr. Samuel Gover's Grocery and Dry Goods Store, thriftily inspecting all that he had for sale before leaving. She would undoubtedly put off buying her meat until last because Schooley and Robert's Butcher Shop was at the top of the hill on Butcher's Row. 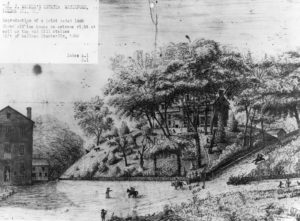 1882 drawing of the Waterford Mill

But she would stop at Leggett's Confectionary to sample the cakes and sweet breads, although that was an extravagance, and then, as long as it was Saturday and she was in town shopping, she would have to visit Sallie Orrison's Millinery Shop to see what was the latest in bonnets. Which would require going to see Amelia Rinkerts, the dressmaker, to look over the latest patterns, and perhaps choose a new fall outfit. Then, before going home, she would be unable to resist the temptation to stop in at Sallie Radcliff's Fancy Store, which was stocked with the most fascinating and useless little trinkets.

The gentleman of the house, responsible for seeing that the horses were properly taken care of by an expert blacksmith such as Silas Corbin, would certainly find numerous errands with which to occupy himself while this was being done.

First, he would surely visit Henry Washington's Barber Shop to have his hair and mustache trimmed. Then while he was on Main Street, he might stop to see Charlie Shoppington, the tailor, and ask if his new waistcoat was finished. 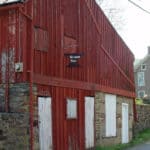 He would probably want to discuss the advisability of ordering a new buggy with Joseph Schooley, the Coach maker, and he might have to leave some boots to be repaired. If so, G. W. Divine did a neat job and on short notice.

While in the neighborhood, he could stop and see Thomas Mount about the new chair that was needed in the dining room or perhaps he would ask Tom to design a sewing table as a present for his wife. And if he were unfortunate enough to need to see a doctor, there was Dr. John Moore over Beans' Store, or if Dr. Moore was on a call, the office of Dr. Love was close by.

There were several mills to which the farmer could bring his grain, and chances were he would find the one where he got the best price. Schooley's Mill was out near Ball's Run, and the Waterford Mills, owned by Samuel Means, one time Captain in the Loudoun Rangers, was the oldest mill in town. The farmer, since his trips to town were an occasion, would certainly bring the wife and children, who had been looking forward to it for a long time. 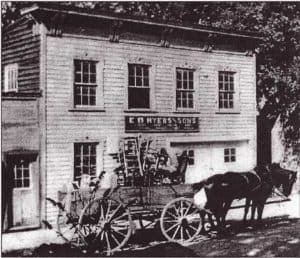 Wagon load of chairs on Second Street in 1919

The wife would first visit the grocery store she favored, to stock up on staples, and to buy some dry goods for family sewing. She might also visit Mr. Bennett, the tinsmith, to buy a new cooking kettle, and also go to the apothecary, to buy Calomel or mercurial ointment.

The children, each having been given a copper penny, would spend a happy hour in the Confectionary, trying to decide between horehound and licorice candy.

The farmer, with the price of his grain in his pocket, might also have a fine hide or two to sell, which he would take to Asa Bond's Tannery down near the Mill. He would probably need some harness repaired by Will Bennett, and while he was there he would inspect the newest saddle with interest and admiration.

He might also drop in at the wheelwright's, to order a new wheel for the wagon, and he would linger at Schooley's Blacksmith's Shop, to argue and complain about the poor price of crops.

All this on a Saturday Market Day in Waterford. At nightfall, the shoppers and businessmen, the blacksmiths and carriage makers, the dressmakers and Sallie Orrison the milliner, would close their shops after a twelve hour day and go home. Long since, the farmer and his family had bounced along the country road towards the farm-there were chores to do, market day or not.

Reprinted from a Waterford Foundation Booklet of 1957.