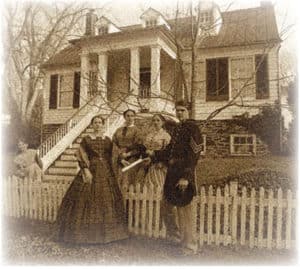 Civil War reenactors outside of "Sunnyside" in Waterford

Waterford legend states there was a shoe shop on the north side of Main Street, operated by a Union man, which was the favorite meeting place of the Quakers and -others of Union sentiment. Here they gathered to hear the latest War news, and to discuss current events.

In this shop a number of the Quakers had gathered when the first news of Lee's surrender reached the town. After four years of much suffering and personal loss, they could at last see the end of their troubles. Their joy was uncontrollable, and grabbing each other by the arms, these black-frocked, sedate Quakers momentarily forgetting the tenets of their Meeting-danced a jig.

In mid-May of 1865, according to the diary of a young maiden, the town was gaily decorated with patriotic bunting and on the highest hill in town,(1) was a formal ceremony raising the Stars and Stripes.

Such happiness was understandable because great physical destruction had descended on this area, which sapped its resources. In the surrounding countryside, dispirited men had deserted the armies on both sides. There were large numbers of deserters skulking in our mountains to avoid the enrolling officers who were instructed to arrest them, Some banded together and became desperadoes, using arms and ammunition, and subsisting by plunder, adding to this area's troubles.

Those whose sympathies had been with the South were disheartened, not only because of the lost cause, but by an impossible political system and civilian organizations which never functioned adequately. The Union strategy of constriction, plus cutting off one piece after another, while pounding the Confederacy's nerve center in Virginia, had brought results. Dire need cut deeply, supply lines failed and the Union was preserved. The war brought blood, death and slow drain. The post-war period would bring long outbreaks of bitterness, yet the scourge helped establish a united nation.

No person remains alive who was involved with the Civil War, yet some of our economic and social wounds are not healed. That War and the anguished years preceding it leave vast unanswered questions still in our minds. Many of the important questions over which the Civil War was fought remain unanswered, reminding us of the wisdom of Santayana when he said "Nations that forget their past must live it over again."

In Waterford, after the war, most of the homes remained occupied, but many residents moved away forever. The town, like a crippled soldier left unable to compete in the aftermath, became a permanent casualty of the war. Thus it happened that Waterford stood still for a time, then slowly slipped into the stream of history.