An excerpt from the book, When Waterford & I Were Young, by John E. Divine. This book shares the author’s experiences and love of Waterford as he grew up in the early 1900s. How to order this book »

This might be a good place to digress a little on the broader history of Waterford's black community, which has been such an important part of the village for many generations.

From early days the unusual thing about Waterford was the number of free black people who lived in and around this southern town. Freed slaves were already living in the area in 1810, the date of the earliest surviving census. And at least one man, William Lane, was born free about 1795. For more than 100 years his descendants owned what has come to be called the Weavers Cottage. 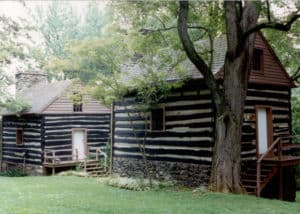 The Quakers had long frowned on slavery and in 1776 banned it officially for Friends. Their egalitarian beliefs meant that former slaves found a haven in that small corner of Virginia.

This is not to say that Waterford for African Americans was a promised land, especially for those who were not free. Even a few Quakers kept slaves, to the distress of fellow Friends. Henry Taylor was one such sinner. He was "much laboured with" by delegations of Friends from 1762 until 1778 when finally he "condemned his former conduct in dealing with slaves." In 1785 there was a "complaint against Jane Connard for consenting to the buying of a slave." And as late as 1841 Fairfax Meeting was obliged to disown Mary Hough for "owning slaves which she refuses to give up."

Non-Quakers in the village had little such difficulty from their churches. Furniture maker John Mount, for instance, had one or two slave members of his household on Main Street as of 1840. And on farms out of town larger numbers of slaves were common: Sanford Ramey, at Rosemont west of Waterford, owned 19 as of 1788; east of town at about that time Joseph McGeach and Joseph Caldwell each had five or six slaves.

Occasionally, in the dry language of legal documents, there are some real stories. Jacob Mock, a farmer north of the village, specified in his 1831 will that "My Negro boy Henson...." was to be freed at age 26 and given ten dollars in cash and a good suit of woolen clothing. Mock took pains to ensure that his "executors provide for him so he shall not fall into a state of slavery again by operation of the laws of the state in which we live."

The three witnesses to Mock's will were all Quakers; perhaps they encouraged the old man's generosity. Or maybe there was even a family connection: census records indicate that Henson had at least some white ancestry. We may never unravel the whole story.

Young Henson enlisted in the 1st U.S. Colored Troops Infantry. He died in 1930.

We do know that Henson fathered a child, also named Henson [Young], who was born into slavery on January 6, 1846. The mother was probably a slave of Mock's neighbor, William Russell, Sr. In 1864, late in the Civil War, young Henson-by then freed by Russell-made his way to Baltimore, Maryland, and enlisted in the 1st U.S. Colored Troops Infantry. He was one of several African Americans from Waterford who served with Union units.

Henson senior, meanwhile, had been working hard and become prosperous, probably as a teamster. After the war he filed a claim with the government for six horses valued at $1,120 that had been taken by Waterford cavalry officer Sam Means in 1862 for his Loudoun Rangers.

Henson junior inherited his father's way with horses. I remember him driving a fine team when I was a child. He died in 1930.

In at least one household in Waterford a free black man owned a slave. Nathan Minor, who owned a house and lots on Water Street, appears to have purchased his wife-there was a slave woman of his approximate age living with him in 1820. This arrangement may not be as odd as it sounds. I have heard that in some cases this practice was meant to ensure that the slave did not fall back under white ownership. By 1830, though, she evidently had attained her freedom. The Minor children prospered; some stayed in the area and others left. I knew several of their grandchildren in the village.

After the war, of course, black people in Waterford enjoyed a new status. Not surprisingly, that change took some getting used to-on both sides of the racial fence. In the summer of 1865, 15-year-old Marie Matthews [Mary (Marie) Ruth Matthews (1850-1867), daughter of Edward Y. Sc Sarah Gover Matthews.] noted in her diary her exasperation that "Our servant walked off this morning without any ceremony whatever. It does make me so indignant to think of the colored people being so impudent." Not exactly the noble sentiments you might expect from a daughter of one of Waterford's leading Quaker families. A couple of months later, however, young Marie took a more selfless view.

Sept 24th. Father, Auntie and Sister Edie went to meeting. Uncle Sam [Gover] returned with them. Auntie and I wishing to go to the colored school held in Waterford, the Capt [Simon Elliott Chamberlin] hitched up and took us. I had been very much prejudiced before going, but I divested myself of all that and became Oh! so much interested in them. I hope I can get a class [as a teacher] as I should like to so much. I think [it] is "bread cast upon the waters and in time it will return."

In the early days of Waterford there were other kinds of servitude involving both whites and free blacks that were not always entirely voluntary. Mahlon Janney, for instance, had a "servant," Duncan McDonald, who ran away for 35 days in 1769. When McDonald reappeared Janney took him to court." McDonald had probably been legally bound to Janney to serve a number of years as an apprentice. This was a common practice at the time.

Often it was the Overseers of the Poor who made the formal arrangements. Usually they would bind an orphaned or other needy teenager-though sometimes a much younger child-to a local tradesman, merchant or farmer. The child would earn his keep with his labor and, by learning a trade, would eventually become self-supporting.

That was the goal; the reality did not always measure up. Sometimes the apprentice ran off, to the consternation of the man who depended on his help. And on occasion the master neglected or abused his charge. In theory, and at least sometimes in practice, that was grounds for breaking the contract.