The quiet cemetery is on a commanding rise at the northeast end of the village. The graveyard takes its name not from the Civil War, but rather from its use by a "union" of Waterford churches. 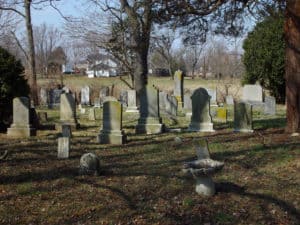 Since the early 1800s, the Union of Churches Cemetery has served all Waterford denominations (albeit segregated into black and white sections), other than the Quakers — whose burying ground adjoins Fairfax Meetinghouse. Both Union and Confederate veterans lie here. Lists of burials are on record at the Waterford Foundation office.

The Union Cemetery was laid out early in the nineteenth century and was strictly segregated, with the black section to the rear. Both sections contain fine marble monuments, but many African Americans could afford no more than a roughly flat stone brought in from some field, or just a wooden marker that quickly weathered away. The resulting gaps in the rows testify eloquently to the inequalities of the day.

Civil War veterans of both races - and both armies - lie peaceably together in the same cemetery. Their graves bear appropriate military markers. One designates the grave of James Lewis (born 1844) who traveled to Pittsburgh during the war where he joined the 55th Massachusetts Infantry Regiment, a white-led black unit like the famous 54th that was Immortalized in the film, Glory. 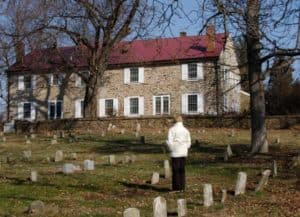 Waterford's founding Quakers built their first meetinghouse (of logs) on this site in 1741. They replaced it with a stone structure in 1761; and ten years later doubled its size. This building architecturally mirrors many Quaker meetinghouses in Pennsylvania. It survived a disastrous fire in 1868 but by 1929 Waterford's few remaining Quakers "laid down" their meeting and joined the congregation at nearby Lincoln. Noted architect Alan McDaniel converted the structure into a home in 1939, an early example of adaptive use.

During the annual Waterford Fair, Civil War reenactors lay a wreath honoring the soldiers buried here. Below are photos of this event.