For most of Waterford's long history, hard physical labor was expected of nearly every resident-young and old, male and female, black and white. But it is clear that much of the roughest, most dangerous work was performed by African Americans, both before and after the Civil War. Slave ads and personal descriptions included in the mandatory registration of "Free Negroes" are filled with references to scars and other injuries and deformities.

For black men, the most common occupation was farm labor. Some specialized. Daniel Webster Minor (1835- c.1905), for instance, was a post-and-rail fencer; Alfred Oraven (c.1813-1887) worked with horses, driving wagons and carriages. Others plied their skills as tanners, millers, stonemasons, etc.

Black women did the laundry for the village. They grew their families' food and were cooks, seamstresses, midwives and nursemaids, both in Waterford and on surrounding farms. After emancipation, teaching was an opportunity some seized.

Despite the hard work. there were also times for recreation and enjoyment. Music was a favorite diversion. There were always rousing spirituals, but also impromptu gatherings of talented singers, especially on the porch of the Corner Store (40183 Main Street) or at Web Minor's (40194 Main Street) - their rich voices sometimes lubricated will more than a drop of liquid refreshment, according to descendants. And in the early 1900s Waterford's African Americans were justly proud of their brass band. At least one member, Ed Collins, appeared with a Knights of Pythias band in Philadelphia.

Other favorite activities included summer picnics. Picnickers would gather by wagon or on foot, usually in a well-shaded meadow not far from the village. Men and boys loved baseball - Waterford teams competed with those of other nearby towns in a "Negro league."

The social highlight of the year, however, was September 22, Emancipation Day. For many years Waterford's African Americans Joined others from all over the county in Hamilton, and later Purcellville, to celebrate their freedom. 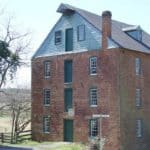 More on the Mill »
Waterford grew up as a settlement around the mill, which has stood on or near this site since the 1740s – the current structure predates 1820. African Americans have worked here as well as in most other enterprises in the village. In particular, Forrest Griffith, stands out. Born a slave on a farm at the base of the Blue Ridge, he managed with hard work and intelligence to buy his freedom – and a few acres. In the 1840s he and his wife and daughter were hired by Waterford's Quaker miller – at $120 a year for all three. Griffith was esteemed by blacks and whites alike. His descendants have gone on to successful careers across the country. 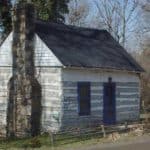 Around 1870, African American Marshall Claggett (1837-1906) moved this modest log structure to its present site from a farm a couple of miles north of Waterford. The Claggett household must have been lively – he and his wife, Angelin, had nine children. The building was owned by a number of other black residents into the 1990s. 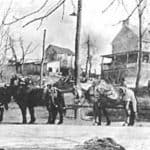 The meadow across Main Street from the Marshall Claggett House was for most of the 19th century the site of a large tannery. In addition to large vets for soaking hides, there were several substantial buildings. One, facing Main Street opposite 40129, housed leatherworkers. Among them was African American Jonathan Kenady (1820-1889), who also whitewashed buildings and fences. He was one of the first trustees of the school on Second Street. 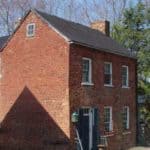 Thomas Lee (b.1872) lived in this house for many years. Like his neighbor Marshall Claggett, he earned his living working on the surrounding farms. And like a number of his fellow African Americans, he put his knowledge of farming to use at home. Thomas kept a large garden - he was famous or his tomatoes - and he always raised a couple of hogs to supplement both his income and the family larder. Hog butchering was an annual fall ritual in Waterford's black community late into the twentieth century. It usually took place up the draw near the head of Tannery Branch.

Vera Lewis and her parents at the Collins cottage

A stone foundation is all that remains of a small log and frame house that collapsed in the 1970s. In the early 1900s it was the home of Edward and Marietta Collins. Marie1ta (born c.1855) was a midwife; she delivered many babies of both races and is fondly remembered for that and for her bountiful garden of tours and vegetables. There is evidence that Ed (1846-1920) served in the Union army during the war. although Marietta was never able to collect a widow's pension. A drummer himself, Ed enjoyed train rides into Washington to attend John Phillip Sousa concerts.