A Look at Waterford in 1926
Comments of a new bride

Reprinted from the Loudoun Times-Mirror, Leesburg. The article appeared September 23, 1971

In August of 1926 I came as a bride to live in the village of Waterford, Va. To a young city girl it was like stepping into a completely new world. The little lamp posts up and down the streets with their flickering kerosene lights looked like fire flies in the dark. The lamp posts had been shortened to accommodate the lamplighter, who was a very short and slightly deaf man. Very early on summer mornings I would often awaken to the faint tinkling of bells; this, I soon learned from looking out my window, was coming from the bell around the neck of a beautiful fat cow. The cow was being led up the street by a small barefoot boy who whistled and sang as he went. The cow was taken each morning and evening to her home to be milked, the milk was turned over to the lady of the house and the cow was returned to pasture again outside of town. People who lived at the edge of town often just pastured their cow up and down the grassy lanes around their homes; those who did not own a cow took their own bucket and bought milk from a neighbor who did.

The town at that time had a mayor, a town council and a policeman, also a jail. The last man to spend time in the jail just walked out after returning his empty lunch plate to the corner store and telling them he had enjoyed his lunch.
The Post Office-same building, same spot it is in today-was a central meeting place for all the young people; many romances developed and bloomed there. 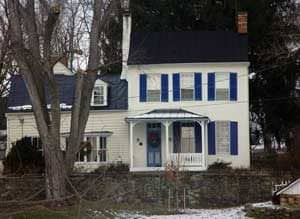 The mail was brought up on the Washington and Old Dominion Railroad to Paeonian Springs, twice a day, along with passengers and their baggage; then from Paeonian Springs, the mailman in his Model T Ford would bring them all in to Waterford. So it was not only mail that people came to the Post Office to get, but to see just who had arrived in town. Few people had automobiles of their own and many still drove horse and buggy.

Many school children living in the country drove their own horses in to school. There was a horse shed at the school large enough to accommodate ten horses. When lunchtime came each student fed and watered his horse as well as himself.

With the exception of one earphone radio set, my husband and I owned the first radio in Waterford. It was a cathedral shaped job which we thought was simply wonderful. This was the beginning of the depression years 1928-­1929.

There was such good music on radio at this time, mostly coming from Chicago. I think. It is hard for this generation to imagine the thrill of getting up in the dead of night (to fix the baby's bottle), turning on that little knob and hearing lovely music from, oh, so far away.

In the fall there was so much talk of preparation for winter that I could hardly wait for winter to come. The coal and wood had to be ordered the stoves put in readiness-the big base burner with its glass front that glowed in the dark like a thousand eyes, the little wood stove for the bedroom, the big range in the kitchen and the dining room fireplace. The garden vegetables, and jellies, preserves and pickles all were lovingly counted on their shelves in the cellar.

I was told that the small buildings protruding from the ground and usually near the house were ice houses that were filled in winter to supply ice for the following summer's use. I pictured them filling the ice house with a hose and letting it all freeze, but that wasn't the way it was done at all. After a week or so of very cold weather, when the ice on the creek was about ten inches thick, the men would take horse and wagon up to the dam or creek and saw large blocks of ice, pile it in the wagon and haul it back to the ice house where it was stored, one layer of ice and one of straw. This was repeated until the ice house was full. The top layer of ice was chopped fine and a deep covering of straw went over all. This was a tremendous job, but in the summer it was really wonderful, for there were no electric refrigerators.

The little village still retains its charm though the way of living is modern and most of the citizens are new. With the movement of the urban into the rural, we wonder what will be the result in years to come. Will there be no more nice, peaceful little villages and lovely pastoral scenes? I have seen throughout the years "newcomers" arrive, retired career people with pockets bulging, city people with a rural yen, etc. all ready to reform the whole place, the government, the schools, everything-but in a few years they usually pull up stakes and pass on-to reform some other place, no doubt.

Eleanor James passed away in late 1986.