More on the African-American experience in the Civil War »

During the Civil War, several African Americans from Waterford joined the Union army to help end slavery and the oppression of their race.

After the war, Waterford's black community faced new challenges. Establishing their own school and church buildings were real accomplishments, but even these advances were evidence of continued segregation. Apologists for the defeated Confederacy reasserted their dominance in county politics, and opponents of black equality were not hard to find, even in relatively progressive Waterford, In one incident in the village in the 1870s, an angry group of whites upset the buggy of the black pastor, an episode the local paper denounced as a disgraceful riot.

African Americans from Waterford continued to march off to America's wars, including both World Wars, but until the Korean conflict always in segregated units.

A full century after the Civil War the long campaign to fully integrate Loudoun County was still being waged, and Waterford's black families were among the many who helped sweep away die final remnants of official segregation. 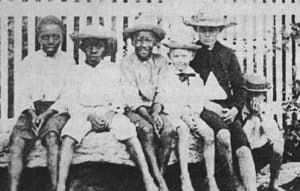 Those who left Waterford over the past century in search of greater opportunity in the wider world have also enjoyed increasing success in surmounting less formal barriers to advancement. A granddaughter of Ed and Marietta Collins overcame the ravages of polio to graduate from Howard University in the early 1900s. (Ed had offered her blunt but loving encouragement as a young child: "If you're going to be a cripple, you might as well be an educated cripple." He, himself, was illiterate.)

Other descendants have gone on to success in arenas as far-flung as Hollywood and New York's Metropolitan Opera, and as diverse as social action, information technology and university administration. For that, many credit the strength of their families - and one of the sources of that strength, the sense of belonging and self-worth gained from growing up in Waterford,

Black cemetery looking out onto the Quaker cemetery

Waterford Union of Churches Cemetery (Fairfax Street)
The quiet cemetery on a commanding rise at the northeast end of the village is the final resting place for many of Waterford s African Americans. Its name signifies its status as a union-of-churches cemetery. Only the Quakers have maintained a separate burying ground; it lies just across Old Waterford Road beside the former meeting house (15510 Loyalty Road)

The Waterford Unionof Churches Cemetery was laid out early in the nineteenth century and was strictly segregated, with the black section to the rear. Both sections contain fine marble monuments, but many African Americans could afford no more than a roughly flat stone brought in from some field, or just a wooden marker that quickly weathered away. The resulting gaps In the rows testify eloquently to the inequalities of the day.

Civil War veterans of both races - and both armies - lie peaceably together in the same cemetery. Their graves bear appropriate military markers. One designates the grave of James Lewis (born 1844) who traveled to Pittsburgh during the war where he joined the 55th Massachusetts Infantry Regiment, a white-led black unit like the famous 54th that was Immortalized in the film, Glory

James Lewis House (15525 Butchers Row)
After the war, James Lewis returned to Waterford, married and built a small house on Butchers Row. He was a pillar of his church and was respected by those who knew him. One who knew him well, Quaker Lewis Walker has left the following remembrance - and unintended insight into racial relations in the village in the late 1800s 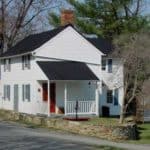 I want to pay tribute to Jim Lewis who worked for Father [J. Edward Walker] faithfully after moving to Waterford. He had been a slave and he told me he carried a welt on his back from boyhood when he had been flogged. He took care of all the outside work including a fine garden and in winter, looked after the fires, and did errands. He made an open fire in Father's bedroom each cool morning after Mother died, usually before Father was up.

Father at one time had built a very nice retaining wall in front of his property [15606 Second Street] and a little later he as interested to see that Jim, without having mentioned it had the same kind of a wall around his property, which was located at the junction of the two roads leading to our Meeting House. He always addressed me as Mr. Lewis and some old colored men of the community tipped their hats to me when meeting me in the street after I had been away to school.